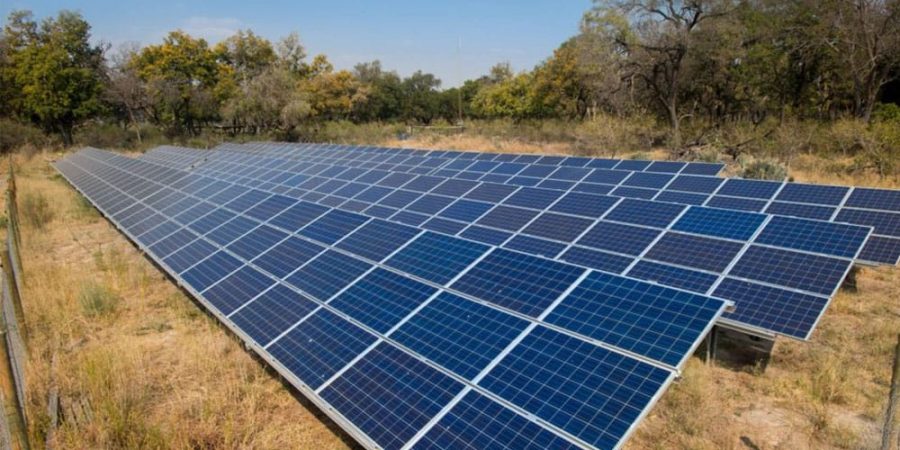 Why solar safari lodges are growing in popularity

There is nothing quite like the African bush. From the majestic big five, to the crisp morning air to diamond filled night skies, very little compares to the experience of spending time in one of our continent’s many wildlife reserves. Now, solar safari lodges are becoming an integral part of the African safari experience.
More and more bush lodges across Africa are turning to renewable energy alternatives, such as solar. These alternatives are clean and of lesser environmental impact compared to the conventional fossil fuel energy resources. This approach is not only a better option for the environment, but also adds favorably to the African safari experience.

Traditional approach to power
The use of diesel generators is the conventional method of keeping the lights on in many safari lodges in remote African regions. However, these are often noisy and distracting from the sounds of the wild.  Today, renewable energy options offer cleaner, more sustainable and also entirely noise-free alternatives.

Solar safari lodges – the benefits
The African tourism industry is benefitting tremendously from solar safari lodges. The costs of solar energy systems that were once expensive, are reducing fast, becoming increasingly more affordable and accessible. This also applies in the remote corners of sub-Saharan Africa where any form of infra-structure was traditionally expensive to develop.
While more solar Safari lodges take root across the continent, it is positive to note that not only do these lodges now have a lower carbon footprint, but their guest satisfaction has also improved, due to improved power supply reliability. This feedback has been seen in traveler reviews.

Two safari lodges that recently made headlines for their great progress in this regard in Botswana are Ghoha Hills and the newly developed Nogatsaa Pans Lodge in a remote area of Botswana’s Chobe National Park. These solar safari lodges are fully powered by solar energy, making them prime examples of how the African safari industry is transforming to cleaner and sustainable goals.

Solar Safari Lodges – a closer look at one

New Southern Energy designed and built the solar system at Sossusvlei. This luxurious lodge is situated within the &BEYOND Sossusvlei Private Desert Reserve, a vast 12 715 hectare expanse deep in the Namib, which is well known as the world’s oldest living desert. Set between dunes, rocky outcrops and gravel plains, this is one of Africa’s most magnificent and unique landscapes.

In 2019, the property was renovated, resulting in an exquisite lodge. Prior to this, a diesel generator has been the property’s primary energy source. Because diesel is both expensive and logistically challenging to transport in this area, this presented many challenges. New Southern Energy designed an off-grid solar system that would not only remove the need for this, but also enable Sossusvlei to become one of Africa’s top solar safari lodges.

Given the sophisticated sustainability that this property sought to achieve, going completely off-grid was the most appropriate solution. Equally, because solar energy is renewable, it is not only more cost effective but also kinder to the environment and true to the lodge’s sustainable ethic.

The 199kWp system is made up of 604 Canadian Solar 330Wp photovoltaic panels which convert sun radiation into electrical energy. Two Tesla battery powerpacks (440kWh) were installed to store energy and supply the grid at night. A smaller generator was incorporated into the solar design to assist during cloudy weather conditions and at night.

The micro-grid system now supplies the main lodge and staff village with the power that is needed. Furthermore, the ingenious roof design provides optimal shade for guests plus maximum space with unobtrusive solar panels.

To entrench the sustainability further, a combination heat pump was installed at each guest room, the manager rooms and one at the kitchen. Each guest unit has a cold-water supply connected, with a hot water outlet from the combination units connected to the building’s hot water reticulation. There is also a back-up unit in place.