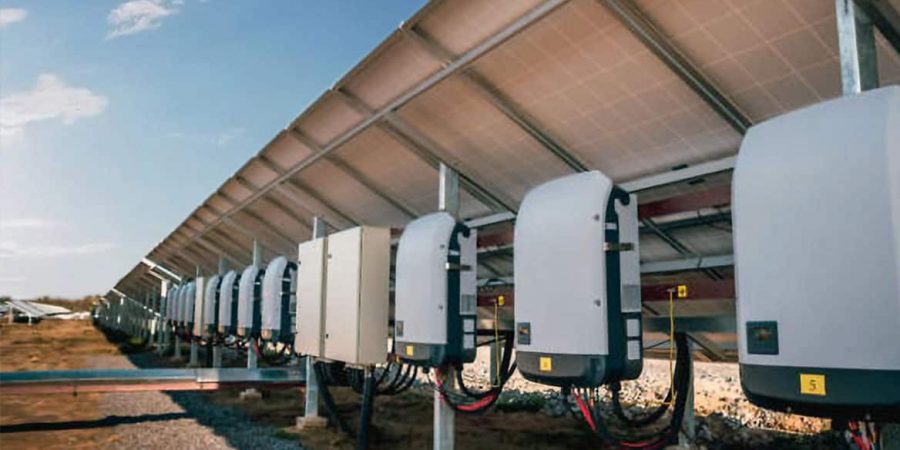 How a Solar Inverter device works and what it does

In the midst of load-shedding, unstable electricity supply, rising electricity costs and increased awareness of the harmful effects of fossil fuels, more and more people are leaning into solar power as an alternative energy source. Given South Africa’s sunny climate, whether you are looking to support your home or business, solar makes sense!
The sun’s energy is unlimited, which makes solar power a renewable, clean energy source, and better for the environment. Furthermore, it will lower your carbon footprint.
A solar inverter is part of the solar energy generation process. This article will explain the basics that you need to know.

Solar inverter – what does it do?

An inverter is one of the most important pieces of equipment in a solar energy system. Solar power works by harnessing the sun’s rays through photovoltaic panels and converting this to energy. A solar inverter is a device that converts direct current (DC) electricity, which is what a solar panel generates, to alternating current (AC) electricity, which the electrical grid uses.
In DC, electricity is maintained at a constant voltage in one direction. In AC, electricity flows in both directions in the circuit as the voltage changes from positive to negative. Inverters fall into the category of devices called “power electronics,” which regulate the flow of electrical power.
Fundamentally, an inverter accomplishes the DC-to-AC conversion by switching the direction of a DC input back and forth very rapidly. The result is that the DC input becomes an AC output.

The first inverters were created in the 19th century and were mechanical. A spinning motor, for example, would be used to continually change whether the DC source was connected forward or backward. Today, electrical switches are made out of transistors. These are solid-state devices with no moving parts. Further, they are made of semiconductor materials like silicon or gallium arsenide. They control the flow of electricity in response to outside electrical signals.
If you have a household solar system, your solar inverter probably performs several functions. In addition to converting your solar energy into AC power, it can monitor the system and provide a portal for communication with computer networks. Solar-plus–battery storage systems can be designed to rely on advanced inverters to operate without any support from the grid in case of power outages.

Solar inverter – the importance of these devices

Historically, electrical power was predominantly generated by burning fuel and creating steam, which then spun a turbine generator to create electricity. The motion of these generators produced AC power as the device rotated, which also set the frequency, or the number of times the sine wave would repeat.
Power frequency is an important indicator for monitoring the health of the electrical grid. For instance, if there is too much load, meaning too many devices consuming energy, then energy is removed from the grid faster than it can be supplied. As a result, the turbines will slow down and the AC frequency will decrease. Because the turbines are massive spinning objects, they resist changes in frequency just as all objects resist changes in their motion, a property known as inertia.

As more solar systems are added to the grid, more inverters are being connected to the grid than ever before. Inverter-based generation can produce energy at any frequency and does not have the same inertial properties as a steam-based generation, because there is no turbine involved.

As a result, transitioning to an electrical grid with more inverters requires building smarter inverters that can respond to changes in frequency and other disruptions that occur during grid operations. It will also help stabilize the grid against those disruptions.

When the grid stops behaving as expected, like when there are deviations in voltage or frequency, a solar inverter can respond in various ways. In general, the standard for small inverters, such as those attached to a household solar system, is to remain on during or “ride through” small disruptions in voltage or frequency. However, if the disruption lasts for a long time or is larger than normal, they may disconnect themselves from the grid and shut down. Frequency response is particularly important because a drop in frequency is associated with a generation being knocked offline unexpectedly. In response to a change in frequency, inverters are configured to change their power output to restore the standard frequency.